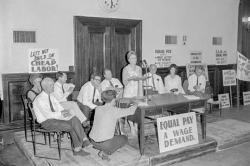 The 50th anniversary of the 1969 Equal Pay Case – which saw the Commonwealth Conciliation and Arbitration Commission endorse “equal pay for equal work” – provides a timely opportunity to reflect on the progress made in women’s pay and employment rights in Australia, and how far we have to go.

Collectively our panellists will discuss: what does economic data tell us about the gender pay gap? We can we learn from our history of pay equity cases? What has been the role of legislation in the pursuit of pay equity and what legislative barriers persist? What broader organisational, policy and cultural factors still need to be overcome, and how?

The Victorian Branches of the Women in Economics Network (WEN) and the Economic Society of Australia (ESA), with the sponsorship support of RMIT Diversity and Inclusion, are proud to host this event in honour of a significant turning point in Australia’s industrial relations history. All are welcome to join us for this dynamic intersection of economics, industrial relations, legal, political and social policy issues.

This event is open to the public and media. Registrations are essential.

If you are interested in joining the Women in Economics Network as a means of supporting our events and membership services, please visit our membership page.

Libby is Director of the Workplace Gender Equality Agency (WGEA), the Australian Government statutory body responsible for gathering gender equality data from more than 10,000 employers. WGEA has forged its place as a world-leading agency in pay equity data collection and analysis, and Libby has presented the WGEA pay equity insights at the United Nations Commission on the Status of Women in New York in 2018 and 2019. In her role as WGEA Director, Libby works closely with employers to achieve gender equality, and takes part in regular roundtable and speaking events with business leaders and their peers to share their experiences, challenges and successes in creating workplaces where the skills and ambitions of employees are equally recognised and rewarded regardless of gender.

Libby has been honoured as one of “200 women who will change the way you see the world” and Apolitical’s “100 Most Influential People Working in Gender Policy” in both 2018 and 2019. She is a member of Chief Executive Women and is a proud Ambassador for ‘Honour a Woman’, a volunteer organisation working to achieve gender balance in the Australian Honours system

Prior to joining WGEA, Libby had a distinguished career in corporate affairs and government relations. Reflective of her strong personal commitment to public service, Liberty started her career as a primary school teacher and formerly served as a board member with non-profit organisations and charities that support the families of children with disabilities and special needs.

Professor Gillian Whitehouse is a Professor in the School of Political Science and International Studies at the University of Queensland, whose research specialises in gender and employment equity issues. Her work focuses particularly on the impact of regulatory frameworks and legislative change on gender equity in pay, the resilience of wage gains won through pay equity cases, parental rights in employment, and occupation-based analyses work/family balance.

Professor Whitehouse’s work in these areas has informed pay equity inquiries and claims before tribunals at national and state levels in Australia. Her research into the use and impact of parental leave in Australia on women’s career progression, parenting roles and family well-being informed a major Productivity Commission inquiry and national policy development, and she is currently part of a consortium undertaking an evaluation of Australia’s paid parental leave policy. Professor Whitehouse’s recent work also includes contribution to the European Commission project on Practising Gender Equality in Science, which identifies organisational strategies to attract and retain women in leadership roles within science and technology.

Liberty is a Principal and Board Member at Maurice Blackburn Lawyers, where she leads the national Personal Injury Law Division. She is a qualified Law Institute of Victoria personal injury specialist and a leader in her field, recognised by the prestigious Doyle’s Guide (2016–2018) as one of five leading lawyers in workers’ compensation in Victoria.

A driving force and change agent for gender equality both within her firm and at a broader scale within society, Liberty serves as Chair of Maurice Blackburn’s Diversity and Inclusion Steering Committee, and Chair of the Victorian Government’s Equal Workplaces Advisory Council, and is a member of the Ministerial Council on Women’s Equality responsible for providing expert advice to the Victorian Minister for Women.

In these various roles, Liberty is intimately involved with identifying and recommending strategies to promote the achievement of gender equality. This includes identifying government action to tackle the gender gaps and workforce participation, promoting good practice examples of initiatives that work to promote gender equality, and developing initiatives that ensure that every employee can thrive in an accepting and supportive environment within their firm.

By driving gender equality initiatives within and beyond the legal profession, Liberty has already established a legacy of a new generation of women leaders. In recognition of this work, she was inducted in the 2019 Victorian Honour Roll of Women. Liberty uses her public profile and large social media following to raise awareness of key issues and is often invited to present at events. She is a regular guest on ABC radio programs where she discusses news, current affairs and politics, and she has appeared on ABC TV’s Q&A.

Iola is a co-founder of the Women’s Electoral Lobby (WEL), an author of numerous books and articles, and a former journalist with The Age.

Iola served as the Australian Council of Trade Unions (ACTU) Industrial Officer during the Accord period of the Hawke-Keating Government. During this time, she served as an advocate in national test cases to improve wages and conditions for women workers, including the parental leave case and equal pay cases for child care workers and clerical workers. Iola helped establish the Action Plan for Women in the Victorian Public Service, and was appointed as Coordinator of the Action Program for Women Workers at the ACTU.

Among her various other service appointments to advance the status of women, Iola has served on the Victorian Women's Advisory Council to the Premier, the ALP Victoria Status of Women Committee, the ACTU Women's Committee, the National Labor Consultative Council Committee on Women's Employment, and the Expert Group on the Impact of Structural Adjustment on Women in Commonwealth Countries. In recognition of her services to women’s employment, Iola has been honoured with an Order of Australia Medal.

While a journalist at The Age, Iola wrote mainly on education and women’s issues and has published numerous article and books. Her recently released book “Winning for Women: A Personal Story” captures Iola’s memoirs of this pivotal time for women’s rights in Australia’s history: she shares her personal insights into how it is possible to bring about reforms in areas like affirmative action, equal pay, superannuation, child care, parental leave and work–family issues. Copies of Iola’s book will be available for purchase at the event.

Professor Roger Wilkins is the Deputy Director of the Melbourne Institute of Applied Economic and Social Research at the University of Melbourne. He is also the Deputy Director (Research) of the HILDA (Household Income, Labour and Dynamics in Australia) Survey, Australia’s nationally representative longitudinal household study.

Professor Wilkins’ research interests include the nature, causes and consequences of labour market outcomes; the distribution and dynamics of individuals’ economic wellbeing; and the incidence and determinants of poverty, social exclusion and welfare dependence.

As part of his work on the HILDA Survey, Professor Wilkins produces the annual HILDA Survey Statistical Report, which each year analyses the latest release of the HILDA data. He also produces the Australian income component of the World Inequality Database. Professor Wilkins is a member of the ABS Labour Statistics Advisory Group and the Australian Housing and Urban Research Institute Research Panel, and is a Policy Adviser for the Australian Council of Social Service. He is also a Research Fellow at the IZA Institute of Labor Economics.

The panel will be moderated by Dr Leonora Risse (Vice-Chancellor’s Postdoctoral Fellow at RMIT University; Chair of the Women in Economics Network Victorian Branch)