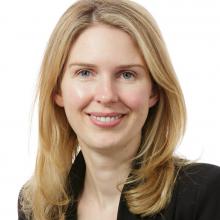 Danielle Wood is the CEO of Grattan Institute, where she heads a team of leading policy thinkers, researching and advocating policy to improve the lives of Australians. She also leads Grattan’s Budgets and Government Program.

Danielle was previously Principal Economist and Director of Merger Investigations at the Australian Competition and Consumer Commission, Senior Economist at NERA Economic Consulting, and Senior Research Economist at the Productivity Commission. She holds an Honours degree in Economics from the University of Adelaide and two Masters degrees, one in Economics and one in Competition Law, from the University of Melbourne.

She is a member of the Parliamentary Budget Office Expert Advisory Committee, the Commonwealth Bank CEO Advisory Council, and the PWC Future of Work Committee. She is also the Australian reviewer for the international Open Budgets Survey.

Danielle is a passionate advocate for women in economics and was the co-founder and first Chair of the Women in Economics Network.